With the rise of the internet of things, we are getting closer to creating the Digital Twins of the built environment. Civil engineers are at their prime for modernizing the built environment that is increasingly more resilient against natural and anthropogenic hazards while conquering ambitious sustainable goals. The foundation for this ambitious vision is laid by combining the strengths of the following fields: artificial intelligence (AI) within computer science; game theory within economics and political, biological, and social sciences; system identification and damage detection within electrical and mechanical engineering; and smart structures and resilience from civil engineering.

What does it mean to bring the built environment to life?
The rationale to embrace a biomimetic built environment during extreme events has been articulated through the need to understand the tradeoffs among different disaster mitigation strategies that provide AI characteristics to the structure needed to combat the external forces from extreme events. The goal is to develop a new generation of smart/adaptive structures equipped with sensors and actuators in which sensors measure the response of the structure in real-time and actuators and damping devices apply the required forces to minimize the response of the structure. Smart structures modeled using AI are buildings and bridges equipped with the latest sensing and adaptive technology. Smart structures modeled for real-time adaptation has three major components: sensors to capture the environment surrounding the agent, a computer to process the information from the sensors and make decisions based on the information, and devices to perform the actions based on the computer's decisions. Smart dampers can redefine the loading path in a structure dynamically. Strategies for equipping buildings with smart dampers have been developed over the last decades through passive systems, semi-active systems, active systems, and hybrid systems(Javadinasab Hormozabad et al. 2021; Korkmaz 2011; Nishitani 2019; Spencer Jr and Nagarajaiah 2003; W Housner et al. 1997). Semi-active devices are particularly promising in addressing many challenges faced by this technology, offering the reliability of passive devices yet maintaining the versatility and adaptability of fully active systems(Gutierrez Soto and Adeli 2017a; Miah et al. 2017; Wang et al. 2009).
Notable examples of structures equipped with semi-active devices include the Bandaijima building shown in Fig. 1 which has 72 semi-active hydraulic dampers, HIDAX dampers by the Kajima Corporation. Since its construction, the data shows that the technology installed was effective in mitigating vibrations from the typhoon (increasing damping up to 4.2%) and earthquake loading (up to 3 times the sway during the 2004 and 2007 Niigata Chuetsu earthquake(Ikeda 2009)). Other adaptive technology includes active mass dampers or a combination of active and passive devices, which are installed in many tall signature structures around the world(Gutierrez Soto and Adeli 2013a; b, 2014). 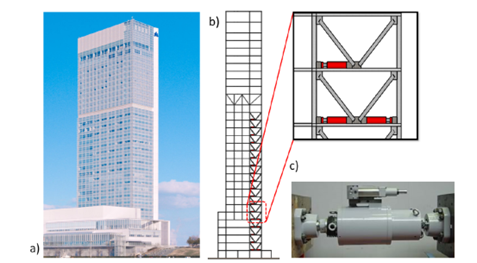 AI is the simulation of human intelligence processes such as input information, learning, knowledge, making meaning, reasoning, conclusions, self-reflection, self-correction, and so on, by machines(Dadwal 2019). Developed in the AI community, an agent is an autonomous abstract or software entity that observes through sensors and acts upon an environment in an adaptive or intelligent manner(Lin et al. 2015; Mendoza et al. 2014; Pinto et al. 2014). In agent-based modeling, the agents are identified, and their behavior is defined. We can model what each agent does and model what the agents do together. Agent-based modeling is particularly appealing for large-scale problems because agents do not require that all the agents interact directly and have complete information about the system. Modeling for artificial agents is divided into simple reflex, goal-based, and learning agents(Bermúdez 2020). The complexity exists in modeling the interaction through the sensory systems and how each agent acts upon the environment. Modeling how agents simplify the complexity to predict, and act is a current challenge in agent-based modeling. Therefore, AI offers the bridge for smart structures to learn and adapt to their environment during their lifetime. Energy consumption is also at the core of a sustainable design(Katsigarakis et al. 2016) Recent advances in data-driven control methods include the power available (i.e., an emergency generator) at the core parameter for dynamic resource allocation(Gutierrez Soto and Adeli 2017b; Obando et al. 2013) Therefore, semi-active devices controlled by data-driven methods would enable the adoption of such innovative technology. One fascinating approach is using evolutionary game theory as the inspiration for the control methodology.

How can we use game theory in civil engineering applications?
While the concept of game theory has traditionally been studied in political(Robinson and Ullman 2016), economics, and social science(Straffin Jr 1993), the mathematical modeling of cooperation and competition is useful in modeling the brain of a machine(Vincent and Brown 2005). Specifically, the brain of the control agent is set up with strategies, which enable the computer to exhibit rational behavior. Game theory has been used in conjunction with AI for autonomous drones and robotic organizational tasks(Spica et al. 2020). Recently, the evolutionary game theory of replicator dynamics started immersing in engineering(Barreiro-Gomez et al. 2015). Replicator dynamics models how natural selection affects the population according to their habitat in an environment based on a measured fitness function or pay-off(Nowak 2006). The number of individuals in each habitat varies because of the interaction and comparison with the average fitness of the total population. Population dynamics is a technique used for the distribution of water in a distributed network (Ramirez-Llanos and Quijano 2010), optimal resource allocation in an electrical power grid distribution(Pantoja and Quijano 2011), and for controlling temperature for improving the energy efficiency in buildings(Obando et al. 2013). Recently, the DREAM structures lab developed a novel data-driven methodology that integrated artificial intelligence, evolutionary game theory, and decentralized control(Gutierrez Soto and Adeli 2017b). We studied the proposed method to reduce vibrations of low- and high-rise buildings(Florez et al. 2021; Gutierrez Soto and Adeli 2017c), smart base-isolated structures(Gutierrez Soto and Adeli 2018), and highway bridge structures(Gutierrez Soto and Adeli 2019; Javadinasab Hormozabad and Gutierrez Soto 2021a). Another application of game theory and other soft computing methods is a design optimization technique. Neural dynamic modeling has already been effective in providing cost-benefit solutions for structural design optimization of diagrid building structures(Palacio-Betancur and Gutierrez Soto 2022) and controlled rocking steel braced frames (Javadinasab Hormozabad and Gutierrez Soto 2021b) as well as obtaining optimal control parameters for advanced vibration mitigation. Read more.