Mineral-producing microbes may soon augment wood if they can be persuaded to take up residence in the construction material.

A joint research project between Purdue University and Michigan State University is developing bioinks that introduce the friendly bacteria or fungi into structural timber as part of the manufacturing process. The composite “living” wood will then pull carbon out of the air to fill the wood’s internal spaces with minerals, strengthening the wood and possibly transforming timber markets to help prevent wildfires.

“Wood has been used traditionally, but there are some issues with it, for example, lifetime biodegradability,” says Tian Li, Ph.D., an assistant professor of mechanical engineering at Purdue and principal investigator for the project. “When you talk about biodegradability, it’s actually degraded by certain types of microbes.”

Jinxing Li, Ph.D., an assistant professor in the Department of Biomedical Engineering and the Institute for Quantitative Health Science and Engineering at Michigan State, echoes the view of degradation and biomineralization as microbial activities that engineers can choose between. He says he drew inspiration from naturally occurring microbes found in black persimmon, which infuse minerals into the wood to make it unusually dense and strong.

“That made me think about, ‘Maybe there’s not the right type of bacteria in the wood,’” he says.

The project aims to develop a process that will double the strength of wood within two weeks of bioink application.

Gemma Reguera, Ph.D., the College of Natural Science associate dean for faculty affairs and development at Michigan State, thinks that in this case, the speed of microbial growth and the lack of live defense mechanisms will work in their favor. The developed bioinks will also provide a protective, nutrient-rich environment for the chosen microbes.

“It’s like a Las Vegas buffet,” says Reguera. “Who wouldn’t want to be there?”

While the living wood microbes will directly pull carbon out of the atmosphere, the team envisions a twofold approach to carbon sequestration. Untreated wood is already a carbon-negative material, said Eva Haviarova, Ph.D., professor of wood products and director of the Wood Research Laboratory at Purdue. Trees capture carbon as they grow.

Haviarova hopes that by enhancing wood’s structural properties, engineers, designers, and architects will turn to the material more and displace other, carbon-emitting materials in construction.

“People (are) a little bit afraid to use wood because we hate to cut the tree,” says Haviarova. “But also, we have to see that we need to balance things out because if we do not use the wood, which is a renewable resource, we are using non-renewable resources.”

“We are really after wood that is abundant and undervalued, so we can have a process to reduce waste and upcycle materials, and then enable properties that are really not found naturally,” says Reguera. “Basically, we're making wood live again.”

While a buildup of woody biomass has primed forests for intense wildfires, finding use for undervalued wood could contribute to better forest management and promote forest health, explains Haviarova.

In addition to added strength, the bioinks would render the mineralized wood less susceptible to fire and possibly imbue self-healing capabilities, similar to bioconcrete.

The team expects to identify viable microbe species and demonstrate strength enhancement and carbon sequestration by the end of the year. 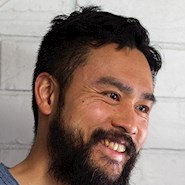