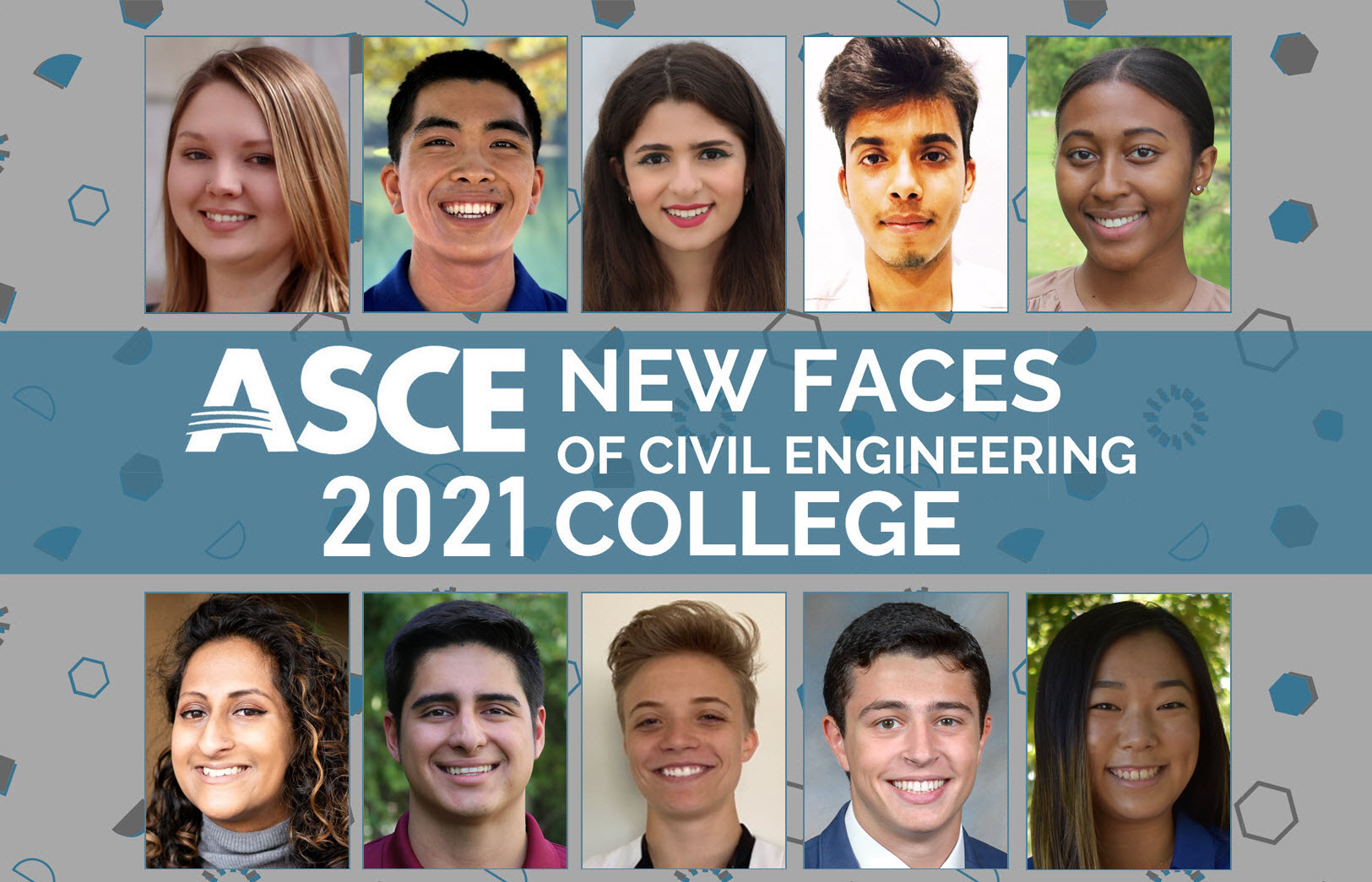 The ASCE New Faces of Civil Engineering–College class represents the best and the brightest students from campuses around the world. These are the future leaders of the industry.

Inspired by her late aunt Kate, the first woman in her university's physics department to earn a doctorate, Bereyso is completing a bachelor’s degree in civil engineering, environmental emphasis, this spring, with plans to pursue a doctorate of her own.

Her accomplishments span the social and the technical. As her school's ASCE student chapter president, Bereyso has organized community service events for local food pantries and nearby stream cleanups. She also participates in the school’s Engineers Without Borders chapter.

Her research earned second prize at the 2019 EWRI World Environmental and Water Resources Congress. And she works year-round as an environmental engineering intern for her local electric cooperative.

“It feels like we are on the cusp of an environmental revolution,” Bereyso said. “Sustainability is becoming more central to business practices, and decreasing human impact on the environment is crucial to maintaining our current standard of living. It’s also exciting to know that my contribution to society as a civil engineer in the form of sustainable infrastructure will still be making a positive impact 100 years from now.”

Do, like so many, experienced the events of 2020 – particularly the social unrest in the United States – and did not like what he saw. He wondered if civil engineering was perhaps part of the problem and, more optimistically, if it could be the key to a solution.

So, as president of the UC Irvine ASCE student chapter, he worked with his fellow chapter leaders to create the “Engineering a More Equitable Society: Healing Injustice within the Civil Engineering World” campaign on Instagram, reaching more than 5,000 people.

“In writing these posts, my friends and I grappled with scientific data and experiences we hadn’t considered before,” Do said. “Through these tough conversations, we concluded our series outlining a future vision for engineering called ‘Power with the People’ that emphasized ethics, equity, and empathy, which we hope will lead to further identification and investment in addressing infrastructure disparities.”

The chapter has since created a coalition that will continue to pursue similar work. And Do will continue these lessons learned in his work as he plans to study urban planning at graduate school.

Ghanem planned to pursue her doctorate so that she could someday teach. Then Aug. 4, 2020, happened – the deadly explosion in the Port of Beirut.

“It changed my plans,” said Ghanem, who helped volunteer in the explosion’s aftermath to help survey damage. “This disastrous event made me want to become an active engineer to offer my services to society.”

Ghanem has been an active member of Lebanese University’s ASCE student chapter since 2017, serving a term as secretary. She was also president of the school’s faculty social club. She interned with the Dar Group last summer and is now focused on using her skills to help her community.

“My future as an engineer in uncertain times like these is surely full of surprises, bad and good, which I hope will help me learn and evolve as a person,” she said. “In a country like mine, in Lebanon, giving back is what it is mostly about.”

Kothari is more than up for the challenge, having already led several large projects during his undergrad years at VIT Vellore in India, where he helped organize the country’s first ASCE student conference in 2018.

Now a graduate student pursuing a master’s degree in construction management at Purdue, Kothari is a project coordinator intern with Healy Construction Services.

“As a student, it feels great to have that responsibility on my shoulders, and I am thankful to my company to show great trust in me,” Kothari said. “My ambition is to run multimillion-dollar projects and improve infrastructure for the well-being of the nation.”

Lewis views her civil engineering path as leading toward twin outcomes – research contributions to improve infrastructure and serving as a role model.

She’s off to a good start on both goals.

“I have a strong desire to raise awareness about opportunities that younger students can take advantage of,” Lewis said. “I ultimately hope to use my platform that I am building here at MSU to inspire younger students to pursue higher education, and especially to show the younger female and minority students that they too can be successful in this field.”

Majumder does not have the typical collection of skills and interests you’d probably associate with a civil engineering major.

For instance, she served on the staff of the Tufts Observer, a student magazine, for four years, including a term as editor-in-chief – a rarity for someone with a STEM background.

Meanwhile, a double major in quantitative economics led her to a two-and-a-half-year internship at the Applied Economic Clinic, a nonprofit focused on energy, the environment, and equity.

She hopes to take much of that experience into her post-graduate work in the energy industry. She’s already brought it back to Tufts as a co-founder of the ASCE student chapter’s equity team, a student group that works with faculty to champion diversity, equity, and inclusion in the civil and environmental engineering department.

“I am excited about the amount of diversity engineering is attracting now,” Majumder said. “The recent engineering class enrolled at Tufts was over 50% women, showing a marked improvement from the last several decades. We still have a way to go with increasing diversity in race and ethnicity, and also creating an inclusive space for all marginalized identities, but we’re making the right steps. Diversity of thought is crucial for improvement and advancement of the field.

“I am also excited about the interdisciplinary work that is beginning to occur in the engineering world. While it is still important that we have students and industry experts working the classical engineering jobs, this can happen alongside innovative thinking and progressive work.”

Patron never has to look far to be reminded of his career motivation.

“Since the age of 13, I was raised in a single-parent household with a widowed mother and two younger siblings,” Patron said. “As a first-generation college student and the eldest of my siblings, I saw my success in college as an essential way to demonstrate to my siblings that any form of adversity can be overcome through self-determination.”

He’s clearly been driven to succeed at Cal State Northridge, where he’s served as the vice president of the ASCE student chapter and the project manager for the steel bridge team.

Patron also has worked as an intern for LC Engineering Group, assisting in the design and analysis of site structures that are then integrated into work on residential and industrial buildings. He plans to pursue his master’s degree in structural engineering.

Inspired by her nuclear-engineer father and what she called the “problem-solving skills, ethical background, and influence an engineer can make,” Perkins is a third-year civil engineering student at The Citadel, with a rank position of team captain (master sergeant) in the Corps of Cadets.

Perkins has been an active member of ASCE and the Society of Women Engineers; is the proctor for the civil engineering department, and manages to find time to serve as captain of the Citadel’s rifle team.

During her summer and winter breaks, her Navy cruise training trips reinforce the fluid mechanics principles she learns in the classroom.

“I am excited to make a difference and an impact on my community,” Perkins said. “I look forward to having professional skills and judgment that can help others and improve the quality of others’ lives.”

Psaltakis is taking his place in the family lineage, following both his grandfather and father into the civil engineering profession.

Taking full advantage of the opportunities afforded him at Georgia Tech, Psaltakis has been very involved in a variety of activities, including steel bridge, intramural soccer, and the Chi Epsilon civil engineering honors society.

He also has been active in the ASCE student chapter, serving as president this year, with previous roles including student conference chair, secretary, and ASCE student ambassador.

“What I’m most looking forward to is the impact the projects I work on will have on my community,” Psaltakis said. “Inherently, as the name of the occupation suggests, civil engineers work toward making society a better place to live. While an engineer’s effect on a community is generally limited by a project’s scope, I plan to always put my best work forward and strive to make the world we share a better place.”

Wong maps the start of her civil engineering career back to the day she decided as a 6-year-old to build a chair her cousin could use at the dinner table. She wasn’t allowed to use a hammer, so she drove nails into the pieces of wood with the heel of her shoe.

“It wasn’t the most stable chair, so my grandpa had to add reinforcements,” Wong said. “He taught me step by step. Since then, my love for constructing things grew. To this day, that chair is still being used by my grandma around the house.”

As a commuter student at Cal Poly Pomona, she has made it a point to get involved with campus life, including several roles with the ASCE student chapter, which she now leads as president.

Wong decided to pursue structural engineering after a successful and inspiring internship with Southern California Edison’s seismic resiliency and climate adaptation team, and she hopes to continue giving back to her community.