A new exhibit planned for the North Carolina Museum of Natural Sciences in Raleigh features a unique — and heavy — set of fossils. Dubbed the “Dueling Dinosaurs,” the fossils include some of the most complete skeletons ever unearthed of Tyrannosaurus rex and Triceratops. 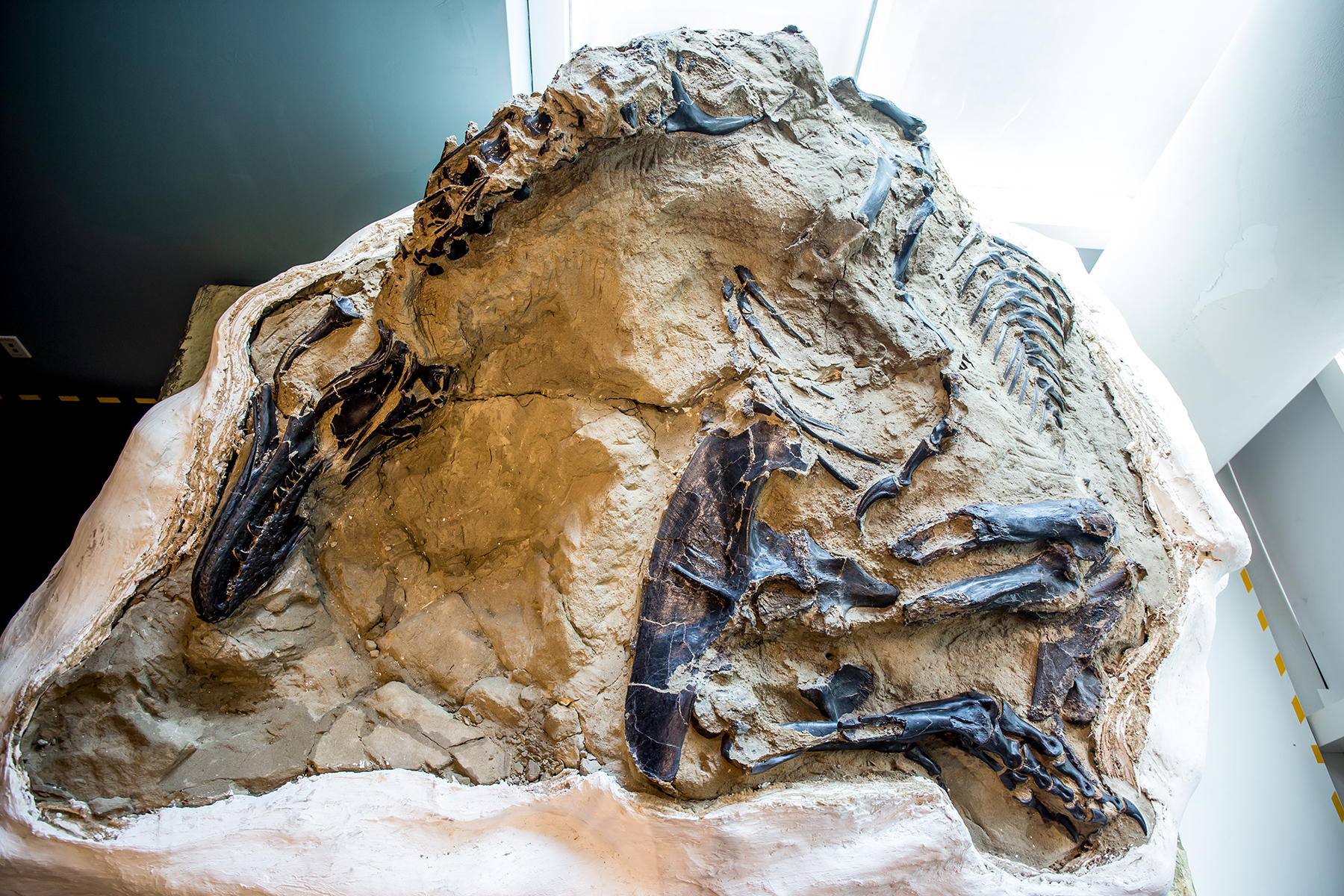 The name of the fossils comes from the fact that the two skeletons are nearly entwined, though National Geographic reports that paleontologists are uncertain as to whether the skeletons simply ended up near each other or whether the animals died together while fighting.

The new exhibit will be located partially within the museum’s Nature Research Center building and partially in a 1,200 sq ft addition being constructed on the north side of that structure. Because the combined weight of the fossils — encased in several blocks of stone, bone, and plaster — is about 15 tons, engineers are working to reinforce the existing floor system by installing additional structural steel supports and wrapping the reinforced-concrete floor beams with a fiber-reinforced polymer system, says Collette Ramirez, P.E., a vice president and managing director of Raleigh-based Lynch Mykins Structural Engineers PC, the project’s engineer of record.

The existing floor system was designed for a 100 lb/sq ft live load that will now have to accommodate an estimated fourfold increase in live load because of the weight of the fossil blocks, Ramirez says.

The original building of the North Carolina Museum of Natural Sciences was a five-story, concrete-framed structure that opened in April 2000. The four-level Nature Research Center is a steel-framed wing with an iconic 70 ft diameter exterior globe that opened in April 2012 across the street from the original structure and is connected by an elevated pedestrian bridge.

The addition to the Nature Research Center will be a one-story, steel-framed structure with glazed curtain walls that is expected to open in late 2023, says Ramirez. It will feature a state-of-the-art dinosaur laboratory open to the public in which visitors will be able to “get up close and personal with the fossils and meet some of the scientific team as they uncover long-buried secrets,” according to the museum’s website.

The addition was designed by Raleigh-based HH Architecture. Brawley Inc., which has offices in Raleigh and Wilmington, is the project’s general contractor.

To support the new exhibit, an area of existing floor measuring roughly 90 ft in the east-west direction and 30 ft north-south is being reinforced, Ramirez says. A portion of this strengthened area in the existing wing extends over an underground parking garage, and a portion in the addition will extend over an unoccupied subgrade space that will be constructed so that the new addition does not impose a surcharge load on the existing structure, Ramirez explains.

Although Lynch Mykins considered various methods to increase the capacity of the existing beams, those approaches were considered too difficult to install, would have added too much additional structural steel, would have reduced the clearances in the parking garage, or simply would not have provided sufficient new capacity, Ramirez notes.

To solve those issues, Lynch Mykins turned to Houston-based Fyfe FRP LLC, which increased the capacity of the concrete beams with an FRP strengthening system that wrapped the supports in the firm’s Tyfo SCH-41 system, secured by the Tyfo S epoxy polymer, says Scott Arnold, P.E., ASME, M.ASCE, Fyfe’s director of engineering solutions.

The system features a high-strength carbon fiber fabric that is often compared to a kind of structural wallpaper, Arnold notes, except that gaps are allowed between segments, similar to internal steel reinforcement. A single layer of the FRP fabric, measuring just 0.04 in. thick and applied in U-shaped, 2 ft long segments, was wrapped around the lower portion and sides of the concrete beams. The primary fibers in the unidirectional material provide strength transversely to the axes of the beams.

Prior to the installation of the FRP wrap, the beams had to be cleaned of any nonstructural coatings and the concrete surfaces abraded so that the reinforcing fabric could be applied directly to the structural member. An initial layer of epoxy was then applied, followed by the epoxy-saturated FRP fabric. The system was applied in March 2022 by Coordinated Systems Consulting, of Chicago, from inside the parking garage with workers on scissor lifts, notes Dennis Dempsey, P.E., Fyfe’s business development manager for the mid-Atlantic region.

Only a small section of the garage had to be shut down during the work, Ramirez adds, and none of the conduits or pipes for mechanical systems in the garage ceiling had to be disturbed, allowing the museum to remain fully functional while this complicated work occurred.